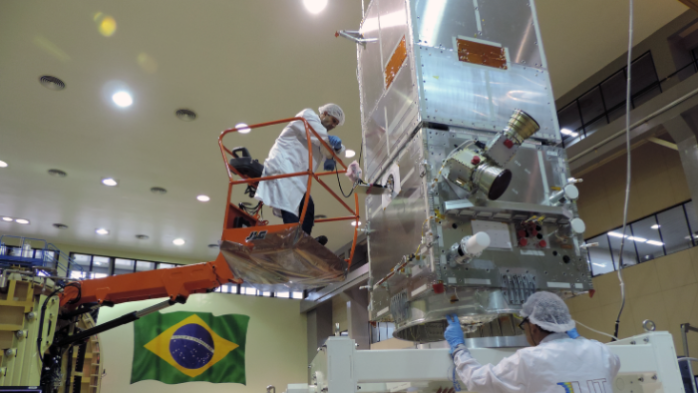 These companies’ participation is strategic and contributes to consolidating Brazilian knowledge in the complete satellite development cycle. “The Amazonia 1 Mission empowers the national industry in systems and subsystems, increasing the level of maturity and conditions for insertion of Brazilian technology in the global space market”, explains Michele Cristina Silva Melo, acting director of Strategic Intelligence and New Businesses at the Brazilian Space Agency. She adds, “São José dos Campos Technological Park is an innovation ecosystem that raises associated companies’ capacity in the national and international space scenario”.

The Mission is coordinated by the Ministry of Science, Technology and Innovation (MCTI) and conducted by the National Institute for Space Research (INPE/MCTI) in partnership with the Brazilian Space Agency (AEB/MCTI). Its objective is to provide remote sensing images to observe and monitor deforestation and agriculture throughout the national territory and provide data from the coastal region, water reservoirs, forests, and environmental disasters.

For the director of operations of the TechPark, José Iram Barbosa, the launch proves Brazil’s capacity to develop space projects. “One of the great differentials of Amazonia 1 is the Multi-Mission Platform (MMP) concept that will optimize future missions.”

Given this scenario, the Brazilian Aerospace Cluster encourages more companies to operate in the space sector. “We are launching a satellite, proving that our country is capable of producing high value-added technologies. We want to increase the proportion of our companies that also operate in this segment, ” says Marcelo Nunes, the Brazilian Aerospace Cluster coordinator.
Investments in the space sector have grown globally. According to Brazilian Space Agency data, in 2008, only 49 countries invested in the space sector. In 2018, this number increased to 72 countries, and 79 countries are investing in this segment by 2020.

Such attention is attracted by the economic benefits that space exploration can generate. Such benefits originate directly from charging for space-related services and indirectly, such as satellite signals used in agribusiness, meteorology, natural disasters, among many other applications.

Equatorial Sistemas and Opto Eletrônica – part of Akaer Group, in charge of WFI Camera, specially designed to monitor the Amazon and capture color images of areas of about 640.000 km². These companies also developed the Digital Data Recorder, a radiation-resistant device that records and stores the image data collected at times when the satellite is out of sight of earth stations, providing flexibility to the mission.

Omnisys – a subsidiary of the Thales Group in Brazil developed and produced the AWDT Band X Transmitter and its Antenna. It was also responsible for the development of testing hardware and software for the Remote Telemetry Unit (RTU), a device that performs the remote acquisition of telemetry and the distribution of commands associated with the equipment and subsystems embedded in the satellite.

Fibraforte, associated with the Brazilian Aerospace Cluster, developed the propulsion subsystem, responsible for altering the speed of the satellite, ensuring the correct insertion and maintenance of its nominal orbit.

AEL Sistemas, which is part of the Sectorial Aerospace Brazil Project, managed by the Tech Park, developed the DC / DC converters, responsible for converting the electrical voltage levels necessary to power the satellite systems.

The São José dos Campos Technology Park is a trailblazer in the State of São Paulo. Created in 2006, it is considered the largest innovation and entrepreneurship hub in Brazil. The Park is in a 15 million m² area where 152 resident companies and startups, 6 science and technology institutions and 10 educational and research institutions are located. Companies such as Avibras and Nestlé have their innovation centers in the Park. Unifesp, Unesp and Fatec have their campuses here.

Over 300 companies are connected to the Park through programs that encourage innovation and entrepreneurship. Resident startups and companies participate in the programs offered by Nexus, the Park’s innovation hub, created to assist businesses with different profiles.

The Park also manages the Brazilian Aerospace Cluster, the most important cluster of the industry in Latin America, which gathers over 100 companies that operate in aeronautics, space and defense. It is also responsible for APL TIC VALE, the Parahyba Valley Information and Communications Technology Cluster, which gathers over 80 companies of the sector, specializing in smart cities, agribusiness, retail and industry 4.0.

Amazonia 1 has six kilometers of wiring and 14 thousand electrical connections. It is a Sun synchronous (polar) orbiting satellite that will generate images of the planet every five days. The satellite can observe a strip of approximately 850 km, with 64 meters of resolution.

The satellite is part of the so-called Amazon Mission, created to provide remote sensing data to observe and monitor deforestation, especially in the Amazon region. The mission will also monitor agriculture throughout the national territory with a high revisit rate, seeking to work in synergy with existing environmental programs.